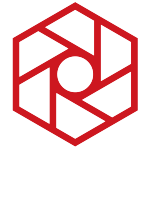 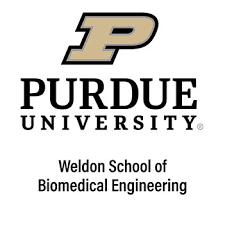 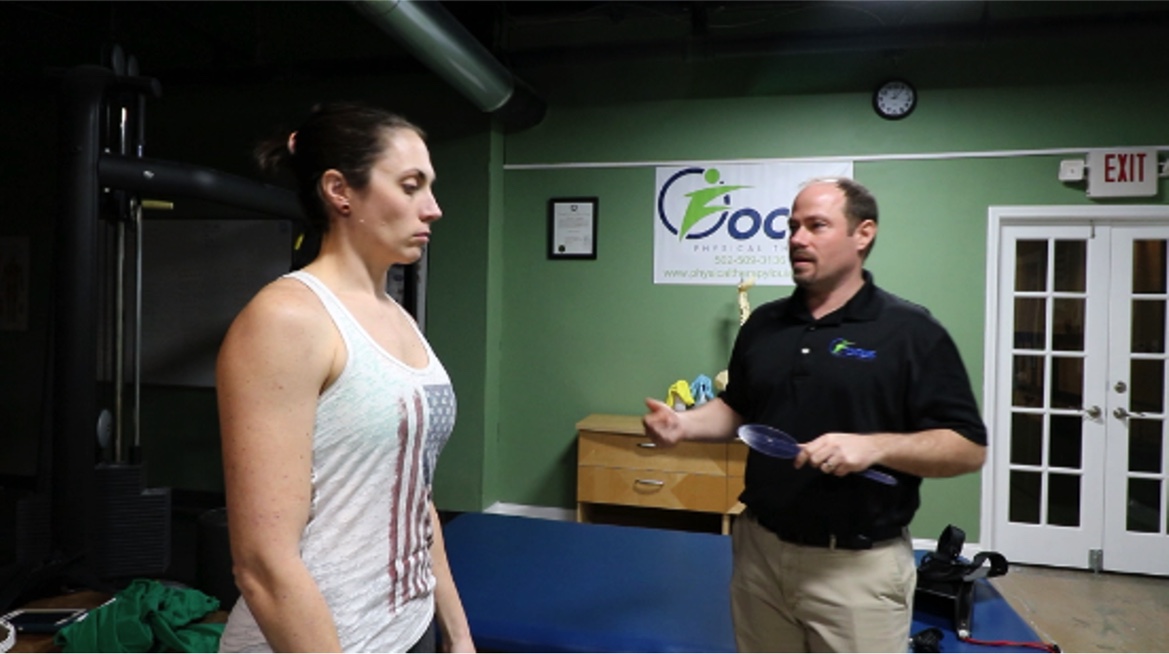 The Neuropak has bridged the gap from traditional physical therapy protocols to a comprehensive way to rehabilitate in a truly functional way which leads to quicker outcomes and reduces the likelihood of re-injury.”

“For the first time I can actively engage my lower trapezius and supporting muscles that stabilize the shoulder and spine and avoid over compensating with other muscle groups.

The biggest impact is the immediate global impact and constant feedback of neuromuscular engagement throughout the entire body. 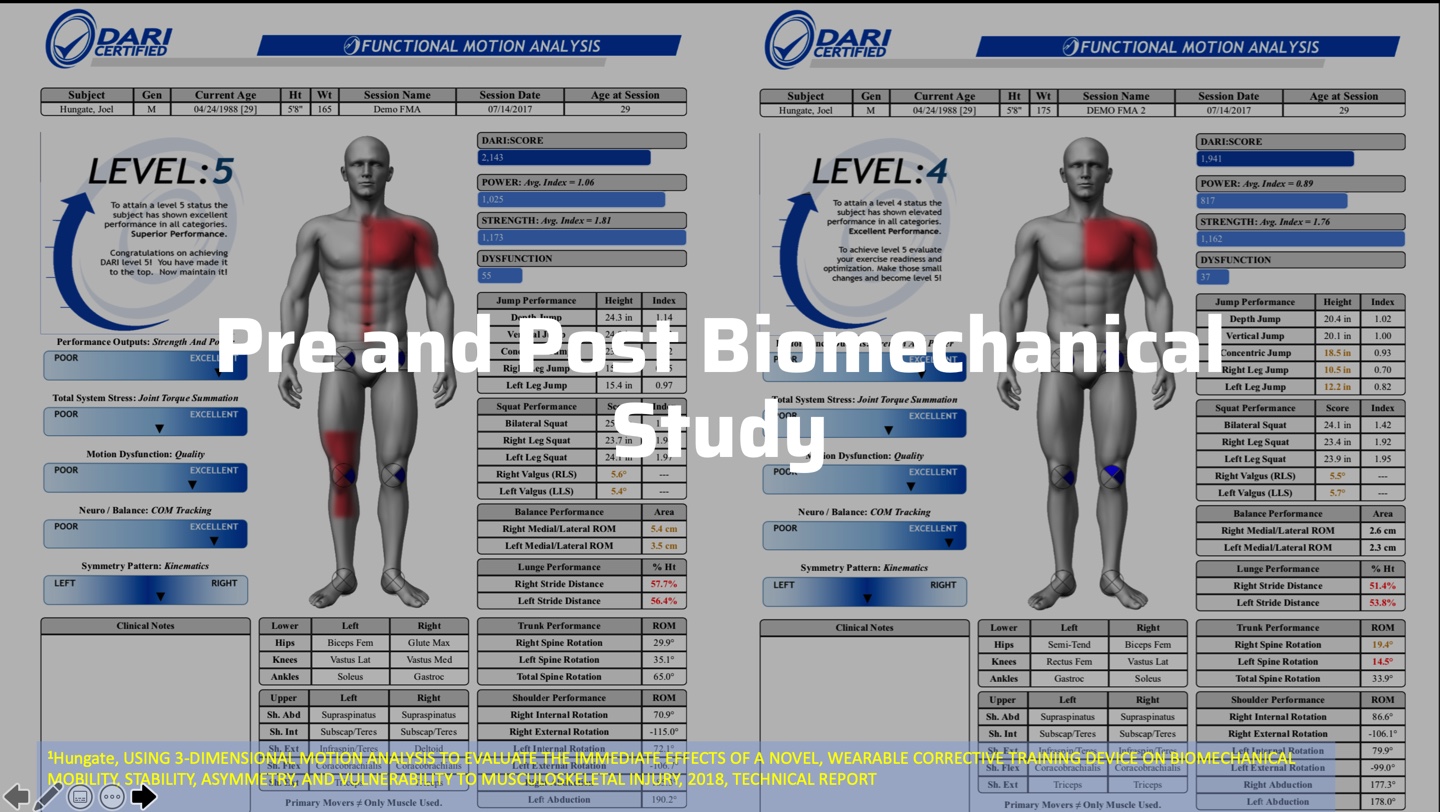 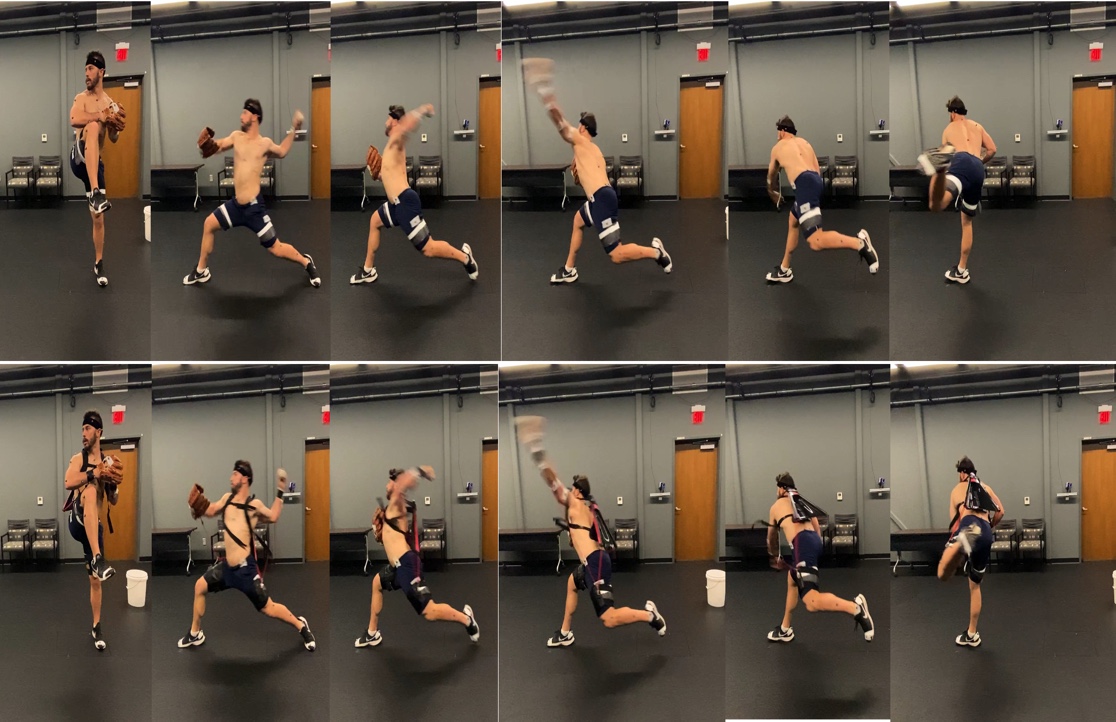 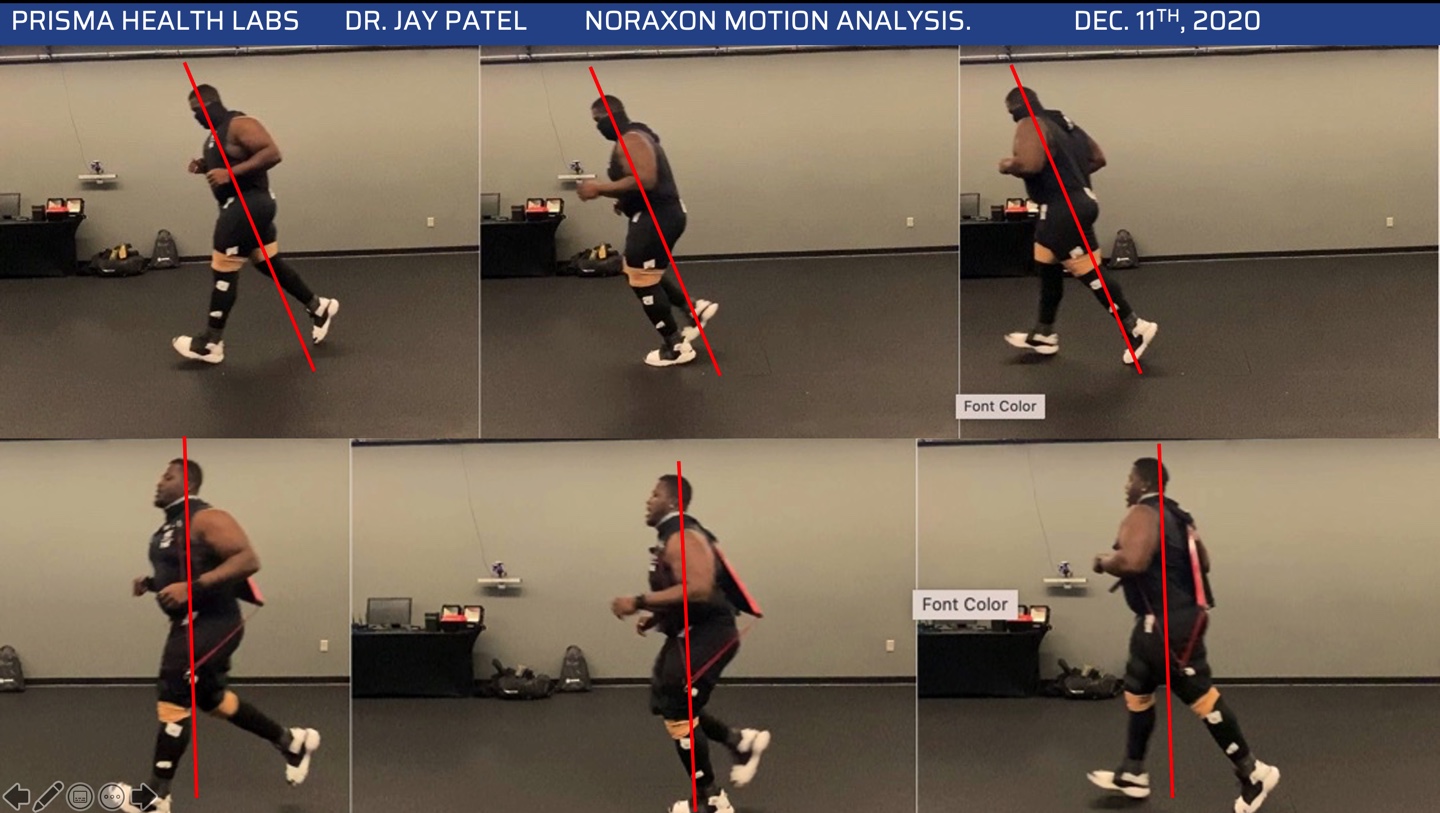 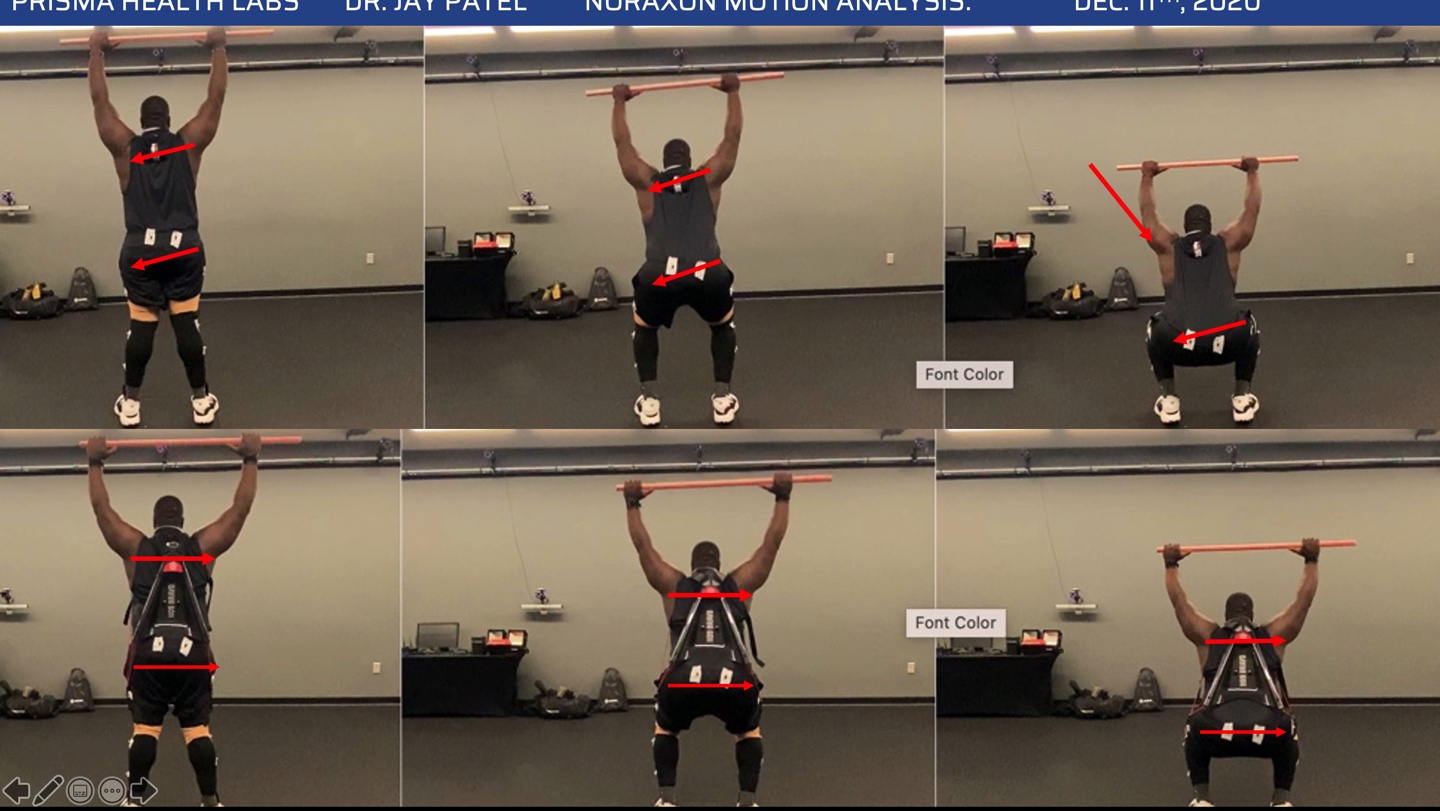 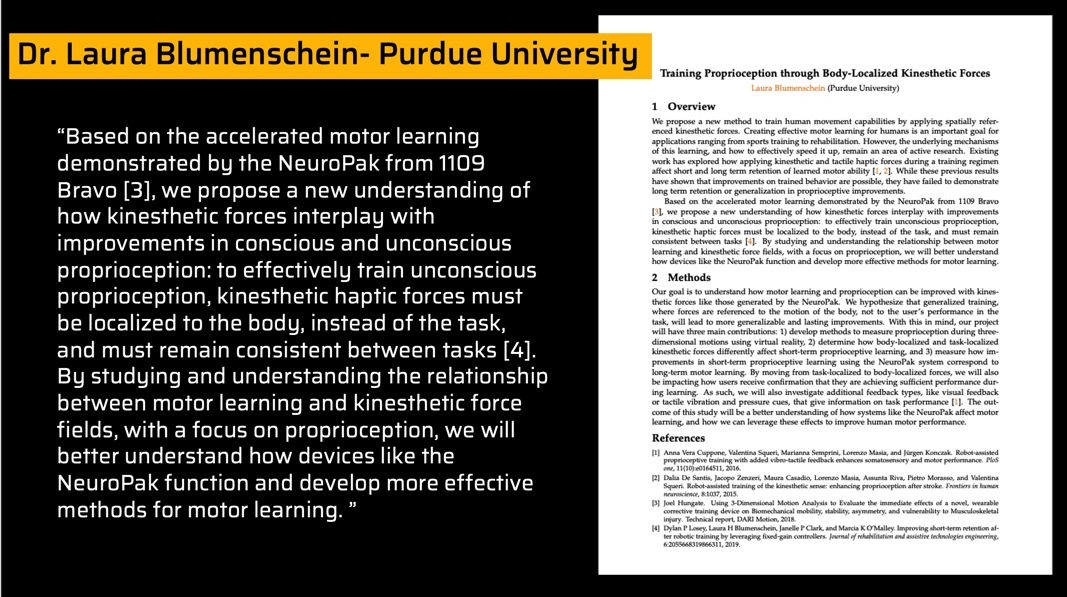 “Comparing both reports will allow your team to see the biomechanical effect your device had immediately on some core, functional movements that I performed in the system. Some impressive, immediate findings I noted:

Your device incurred a significant increase in my core stability during unilateral balance testing (especially considering I exhibited solid balance before donning the device!), and improved my stabilization during control of my center of mass, hips, knees, and ankles on both lateralities, in both the M/L plane and A/P plane.
Your device also immediately eliminated some asymmetries I exhibited in the unencumbered scan–namely at my knee and spine.
Likewise, looking at the smoothness of my motion data curves, your device did not have a significant effect on my ability to perform any planar ROM (save for some spinal rotation limitation due to impingement), nor did it have any effect on my ability to achieve comparable squat depths. The smoothness of the motion was a surprise to me and is a testament to your design not incurring “jerky” patterns while in use by an operator.

Also of note, the device obviously had an effect on my jumping ability (due to the extra tension and weight) but that is the point of having it on in the first place. Also of note, my unilateral kinetic chaining was not encumbered with the device, though I would have to repattern my kinetic chaining to accommodate the device during my bilateral vertical jump–but once again I think that is the point behind training with a new layer of neuromuscular stimulation.

All in all, I was thoroughly impressed with the freedom of movement throughout the functional motion analysis, and the “opening up” that the device incurs in spinal and core stability, which made an immediate difference. Likewise, I was impressed with my ability to perform even while fatigued from the unencumbered scan and still maintain smoothness and ROM.

The ability of this device to add tactile input to key muscles and joint DURING a sport or job specific task is KEY. This allows the user to better train the correct positioning and activation of the muscle groups that are actually used during the activity.

In regards to Tactile input the proprioception of the associated joints and muscles will allow training during the activity that would using take hours of training with NON sport or job specific tasks.

Fryette laws of spinal motion.  Research based knowledge of how the spinal is dysfunction as it related to muscle activation and how to correct it.
https://www.physio-pedia.com/Fryette%27s_Laws_of_Spinal_Motion
More research for the anatomy of how the lumbar spine stabilization with force coupling with contralateral muscles groups.
https://www.ncbi.nlm.nih.gov/pubmed/7701385
https://www.aaronswansonpt.com/force-coupling-for-the-lumbo-pelvic-hip-complex/